Anne-Marie has been working with James Bach in order to write a book on coaching Testers & research for this book has involved the (Skype) coaching of many Testers. This session was a quick glimpse into how online coaching works. 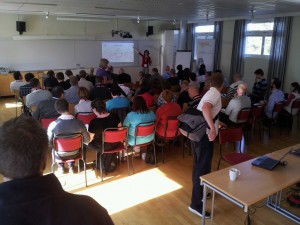 Anne-Marie (AM) had put together a really interactive session which involved a small amount of “lecturing” from AM at the beginning which transitioned nicely into AM coaching a student in front of our eyes! The slides for the “Coaching Testers” session can be found here

The demo from AM involved the student testing a file (which was an image) which had previously been sent over to the student. It was interesting to see the responses from the student & how they differed from how I would have answered.

The final part of the session involved us getting our hands dirty with some online coaching. There were 4 laptops set up at the back of the room, each with a student Tester waiting to be coached. 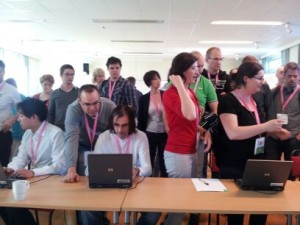 The session was well attended & participants really enjoyed the hands-on aspect so much so that the come-&-try-it element of the session continued on into the Test Lab later that evening.

Skype coaching is something I would really recommend, having had a session with both Anne-Marie & James Bach and coaching is definitely an area I’m interested in exploring.