I’m a fan of the (Agile) Testing Quadrants, first described by Brian Marick back in 2003 as a matrix & later popularised by Lisa Crispin & Janet Gregory.

James Bach helped me to break down the quadrants in order to get a deeper understanding of what each quadrant meant. It was during this conversation I realised I had a very shallow understanding of the model & I was effectively diluting (& even twisting?!) the message the quadrants were trying to get across. 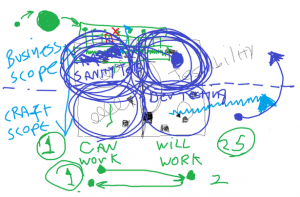 This post is the 1st in a series of posts outlining how James helped me to realise that I didnt fully understand the version of the testing  quadrants I was preaching about by not only linking back to the original model from Marick, but also together creating our own version of the quadrants

OK, James did most of driving but I like to think I played my part & I certainly have taken a lot from the conversation. The image above is the output from the chat. It obviously doesn’t say much about what we spoke about, so I hope to break down the model we arrived at.

There was some good conversation when James posted the image on Twitter.

To help me define & refine this model I’m going to use the following resources:

I’ve gathered a collection of the different representations of the model for a visual comparison.

What I hope to gain from this exercise is a model which I understand deeply, use daily & also share with others to demonstrate how I approach testing in an agile development lifecycle.

As you can imagine, this is going to take some time, so please bear with me…

Finally, for now, I want to thank James Bach for taking the time & effort to help me not only break down the quadrants & build them back up again in order to give me a deeper understanding of this model, but also how to approach dissecting other models which I may have a shallow understanding of.