Clare & I gave up alcohol for 12 months last year & we decided to raise money for the fabulous Anthony Nolan charity.

We chose this charity because Clare’s brother-in-law underwent stem cell treatment for a rare blood cancer a couple of years ago.

At that time, we registered for DKMS as we are too old to register for Anthony Nolan, so this was our way of giving to them.

Today I received a letter from my dad containing a clipping from the (Crawley?) Observer dated 1976, 2 years after the Anthony Nolan Bone Marrow Register was established….

So it turns out my dad was part of group of doctors in Crawley (UK) collecting blood samples as part of the Round Table appeal on behalf of the Anthony Nolan charity! 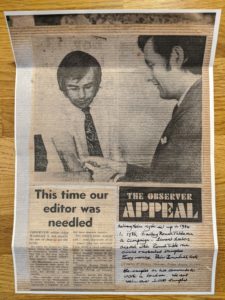 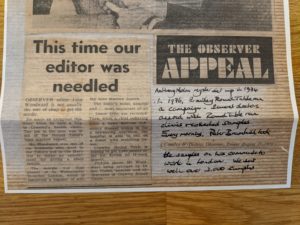 This time our editor was needled

OBSERVER editor John Woodward is not usually the sort of chap to get the needle.

He made an exception this week when he took a trip to Crawley’s health clinic. The jab in the arm was in aid of the Round Table’s bone marrow appeal.

Mt Woodward was one of the hundreds who went to the Table’s hut in the Martlets to make an appointment for giving a blood sample.

The sample was them passed on to Westminster Hospital, London, which is compiling a register of willing bone marrow donors.

The donors name, address and – most important of all – tissue type, are recorded.

Then, when a child suffering from a bone marrow deficiency disease comes in for a life-saving operation, the hospital is able to call on a donor with matching tissue.

Crawley Round Table is hoping to get 2,040 names on the list during the 14-week appeal.

Anthony Nolan register set up in 1974.

Every morning, Peter Bramhill (my godfather) took the samples his commute to work in London. We went well over 2,000 samples.

A lovely memory received as a letter I just had to share!

And finally, in case you’re wondering, we’re still off the booze 😉