In our team, I noticed the way we were speaking & the words we were using sounded as if we were trying to influence others of our thoughts & ideas.

Sometimes this made me feel uncomfortable, especially when the recipient didn’t realise they were being influenced (or didn’t know what to do about it) & consequently their opinion was altered as a result of the language used, not merely the content. 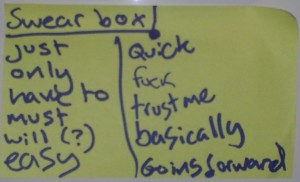 I pointed these words out (& the impact they were having) to the team & we opted to try & not use them – they became swear words which carried a fine if spoken – 5 strikes & you’re out (to buy the coffee round).

The list grew as people tried to avoid using the words, but this is what we had at last check:

(this was just one of my pet hates, not sure if should count as a swear word)

(setting an estimation bias before the poker cards were played)

(worse still:  “all you need to do to test this quick change is…”)

“Will” was a tricky one for the team – it wasn’t always being used as a swear word, but there were some occasions the word used which made me feel uncomfortable so it made the list.

I observed how people reacted to these cuss-filled sentences – Testers would stop thinking about what they actually needed to test, Programmers were happy their code wasn’t being questioned too critically & Business stakeholders would be certain a feature had been developed, tested & ready for release to Production environment.