With the sun shining (& the wind blowing!) we headed outside to see how changing context impacts our testing of some crazy remote controlled robots! 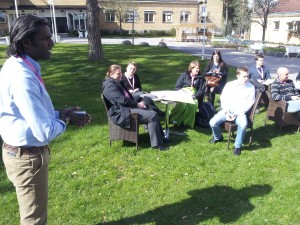 We were split into groups & the first task – define “context”. Man, that proved tricky. Did I mention I was in a group with Zeger Van Hese & Michael Hunter? These gents are renowed for their ability to think things through. I opted for role of team scribe, only occaisonally chucking in a few nuggets of what I thought might be testing gold…

After trying to define “context”, each group was given a Hexabug to play with to try & work out what they were about. This was interesting – we think the frequencies were interfering with each other. Turning the bug off & on again seemed to do the trick!

We were then given the 1st of 3 snippets of information about the project in which our bugs were going to operate. From these snippets we were to drive out a test strategy for our project. The initial snippet for our group was quite vague & we found it really hard to get started. We didn’t get much of a strategy from snippet 1.

Eventually the wind beat us & we moved back indoors for the 2nd round of snippets.

For our group, the snippet along with some supporting context from the “client” refined our situation. It was interesting to note that once the scope of our project was narrowed, our test strategy blossomed – key takeaway for me from this session: creativity requires context. This seemed really counter-intuitive to me, but the evidence was there for all to see!

The 3rd snippet refined the context further & fortunately didn’t change our strategy much.

The other groups, however, had their worlds turned upside-down with each snippet. It was interesting to see how they reacted as their contexts changed.

What I really enjoyed about this session was the cross communication between the groups  after each round of snippets had be digested & the strategy updated. Each group had to present their new context & how it impacted their test strategy. We had the chance to question the other groups about their contexts & strategies – It was great being asked a question which we hadn’t thought of & re-adjusted our perception of our context.

Overall, a great session which clearly demonstrated the importance of context on a project. It also showed that having a large test strategy written up front prior to testing is potentially going to be rendered useless as soon as the situation of the project changes.

The session was brilliantly executed with some great pointers from the facilitators. The Hexbugs made a nice touch as well!